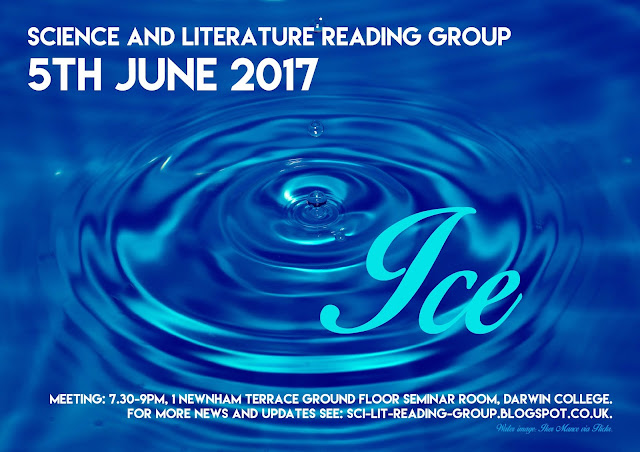 Our next meeting will take place on Monday 5th June at Darwin College: we will be reading The Frozen Deep by Wilkie Collins.  Further reading is available here, or why not listen to an extract from its Overture here? 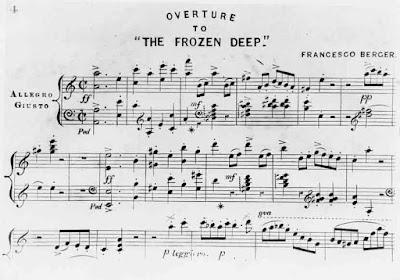 All welcome!
No comments:

On what was one of the sunniest and warmest days of the year so far, we met to discuss Ray Bradbury's 'Death-By-Rain', or 'The Long Rain'. Liz gave a fantastic introduction, which introduced not only Bradbury's own life and ambitions (to 'prevent' not just to 'predict' the future), and the film version of the set text (see above), but also set 'The Long Rain' in a context of 1920s-1960s Venus stories. Based on observations of the planet's cloud cover, these tales often depicted Venus as a water-world: a tropical jungle, humid, warm, and uniform, akin to a prehistoric Earth. Bradbury's story - Liz showed - used this setting for a extreme adventure narrative, looking at the psychological and sensory experiences of people trying to navigate such an unforgiving landscape.

Our discussion followed on from these themes, to explore how Bradbury focused on the reactions of his militaristic men to the situation they were in (with, perhaps, slight inconsistencies or unanswered questions of plot or detail), rather than providing an omniscient overview. We looked at his ways of describing the rain - whether through the repetition of the word 'rain', to place the reader, like his characters, under its ceaseless or even torturing presence; or through passages where the rain took on more of a character or agency, posing for photographs, turning into monstrous forms and storms. We considered how the protagonists became unmoored in time and space, with fast-growing vegetation and aimless wandering, bleached- and leached-out bodies and hopeless futures; and wondered what on earth (or on Venus) they were doing there. Finally, we considered the story's ambiguous ending: was the heavenly-sounding Sun Dome just too good to be true?

Our next meeting - continuing to be seasonally inappropriate, and to think about extreme adventures - will be a discussion of The Frozen Deep. 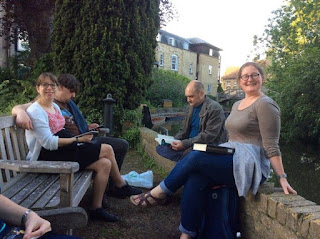 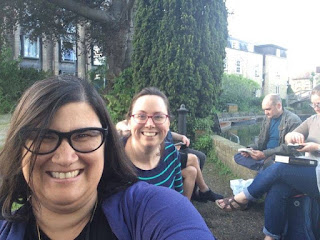 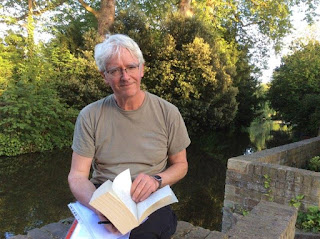 Capelotti will discuss his research into the history of place names in Franz Josef Land, and read from his new book The Greatest Show in the Arctic: the American exploration of Franz Josef Land, 1898-1905. This delves deeply into three fatally flawed American attempts to reach the North Pole from the Russian archipelago of Franz Josef Land between 1898 and 1905. The expeditions were led, in turn, by a nationally-syndicated journalist running from debts, a mistress, and an illegitimate daughter; a deranged meteorologist with a fetish for balloons and Swedish conserves; and a pious photographer in search of God in the Arctic. All three leaders were supported by international casts of characters worthy of a three-ring circus. Two of the expeditions were haunted by still-unexplained deaths and all witnessed both improbable triumphs and ultimate failures.
No comments:

Thursday and Friday 14 and 15 December 2017, All Souls College, Oxford

Euclid's Elements of Geometry was highly visible in early modern culture: a touchstone for mathematical training as well as a spur to new mathematical research throughout the period. In this period dozens of editions of the Elements were printed, and it was certainly the most widely read mathematical book of the time. Different editors made very different choices about the content and layout of the Elements and the other works attributed to Euclid, based on different assumptions about the meaning and authenticity of the texts and their component parts. Likewise, different readers approached the text in very different ways, bringing to it very different assumptions about the use of (printed) texts, and about the kind of text the Elements was and the kind of attention it deserved: logical or philological, geometrical or practical. Many readers annotated the text, and many selected sections for copying into exercise books. During this period, standards of geometrical proof were being actively questioned by mathematicians, but geometrical methods were being deliberately brought into other fields such as medicine, physics, and philosophy.

This workshop will consider the ways early modern people engaged with Euclid's works – from schoolchildren and artisans to teachers and scholars – and attempt to understand their role in their lives and in culture. It will examine the unique cultural position Euclidean geometry occupied and how that position was shaped and maintained. Invited speakers will include Renee Raphael, Robert Goulding, Catherine Jami, Sabine Rommevaux, Sebastien Maronne, Yelda Nasifoglu and Philip Beeley.

Proposals for papers are invited on all aspects of early modern reading of and engagement with the works of Euclid. Proposals should include an abstract of no more than 250 words and a brief CV, and should be emailed to benjamin.wardhaugh@all-souls.ox.ac.uk by 1 August 2017. The conference can provide accommodation, and contribute to travel costs, for speakers.
No comments: 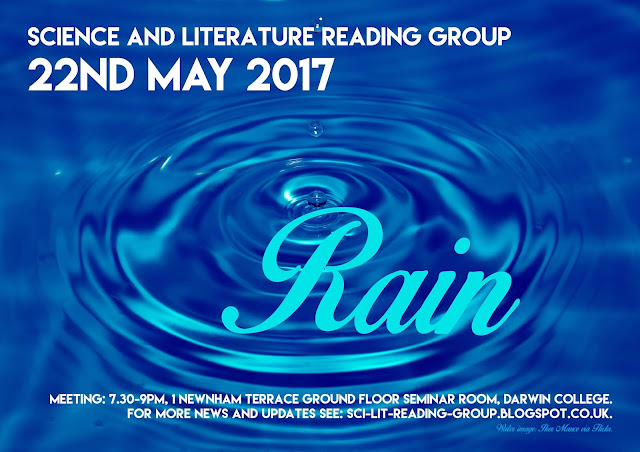 Our second meeting of term will take place at Darwin College from 7.30-9pm in 1 Newnham Terrace. We will be reading a short story by Ray Bradbury, first published as 'Death-By-Rain' in Planet Stories (1950), and then as 'The Long Rain' in several collections of his short stories, including The Illustrated Man (1951). Editions of The Illustrated Man are available in the University Library, or contact MK for a copy of the story.

All welcome!
No comments:

We began our term's readings with 'water's soliloquy', the wonderful Dart by Alice Oswald. A lively conversation flowed - just like the poem's Protean protagonist (Proteagonist?) - from voice to voice, place to place, topic to topic, well-chosen word to well-chosen word.

Sound loomed large: we foregrounded the poem's connections to oral traditions and its effectiveness when spoken out loud; we considered Oswald's research process recording a variety of interviews to ensure the poem was 'made from the language of people who live and work on the Dart', 'who know the river'; we reflected on her mental compositional practices while constructing her 'sound-map', or 'songline'.

Drawing these voices together into the 'mutterings' of the river provided a sense of shifts in perspectives and of being somewhat adrift in time: former trades and industries of the region sat alongside cutting-edge technologies (both commercial and leisurewear). However, we felt the poem avoided nostalgia or sentimentalism; indeed, its commitment to evoking a particular multifaceted landscape prompted a more nuanced set of environmental concerns. (We felt we would come back to these more ecological or political concerns when reading Rachel Carson later in the term.)

The glimpses of people or views moved past the reader, some members of the group thought, like those glimpsed through the window of a train -  just enough detail for each person to make them feel like a rounded character, but leaving one wanting more. All of these different voices, we felt, claimed an ownership of the river, or at least a synecdochic part of it (a bank, a bend), as theirs. The reliance on the river, and its central place in their lives, was clear, and our thoughts on this topic were immeasurably enhanced by the contributions of two participants who had grown up around the Dart. They agreed that there was a sense of place specific to this river, and which Oswald had been able to capture and convey.

The reading experiences of group members were shared, whether rushing through, revelling in its sounds and imagery, before returning with a more deliberate approach to Oswald's unusual but apposite vocabulary; or being confronted by the poem's difficulty, and considering the problems of translation. Throughout, it was felt the poem's interconnectedness and interdisciplinary nature, drawing on myth, memory, or even the natural historical gory spectacle of an eel eating its way out of a heron (yuck!), shows how the river brings together these voices, images, vocabularies, and authorities as complementary sources of expertise, while paying homage to the wider connotation of rivers as lifeblood.

Overall, then, a marvellous session to start the term, and a pleasure to see new, familiar, and returning participants. Next, we face the Venusian rain, and I'm not sure a brolly will be enough to protect you...
No comments:

Song of Contagion hits the stage in London on June 13-17th. The show mashes the world's great musical traditions together into a show that explores how industry lobbying, patient activism and media hype interact to distort priority setting in global health. You can book tickets here. More about the show and the project here.

If you've never been to Wilton's, it's worth coming to the show just to see this fantastic Victoran-era music hall in all its crumbling, East End glory (the BBC Proms follow us to Wilton's in July). Come also, of course, because Song of Contagion will be thought-provoking and damned good fun. Wilton's is within walking distance of the last cholera outbreak in London (1866) - the subject of one of our songs.

On Saturday June 17th, London historian, guide and all-round great entertainer Sophie Campbell will lead a walk exploring how the disease, and the great Victorian engineering project that wiped it out, affected Londoners. Sign up here.
No comments:

Screening - William Herschel and the Universe: a film by George Sibley

On March 13th, 1781, in his own back yard, using a telescope he built himself, a 42-year old musician named William Herschel found a new planet for the first time in history. That discovery doubled the size of the known solar system and would change not only his own life, but astronomy as well. William Herschel and the Universe, by Florida film maker George Sibley, tells the story of how a previously unknown amateur astronomer and his telescopes took the scientific world by storm.

Special showing in seminar room 2, Department of History & Philosophy of Science, Free School Lane, Cambridge CB2 3RH 6 June 2017, 4pm Introduced by the filmmaker George Sibley, the film will be followed by a Q&A with George Sibley and Simon Schaffer.
No comments: 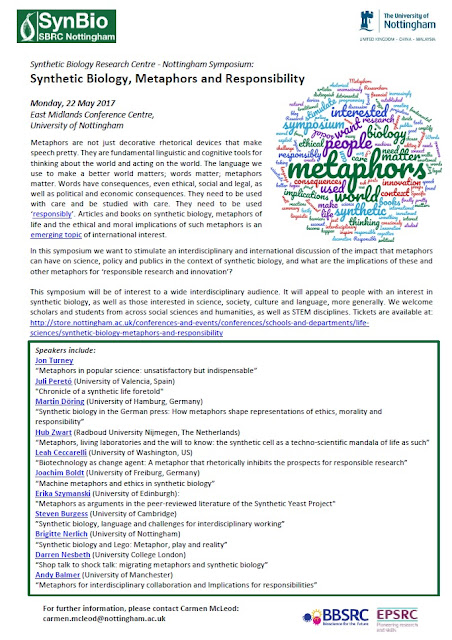 This upcoming seminar in the Faculty of English will be of interest to any who enjoyed our ballooning adventures in the air last term:

This term’s second and final meeting of the English Faculty’s 18th-Century and Romantic Studies seminar will take place on Thursday 11th May at 5pm in the Board Room, Faculty of English. Prof. Clare Brant (King’s College London) will speak on the subject, ‘Literature, experiment and eighteenth-century balloons: light verse and other flying hits.’ A synopsis of the paper follows below. All are welcome.

“In 1783, fire balloons were successfully sent aloft by the Montgolfiers, and swiftly joined by balloons raised by gas. The philosophical and practical consequences of these experiments were immense: at last humans could fly. What would they do with this astonishing opportunity? In the period of balloon madness which followed, writers took up the subject with enthusiasm. Balloons inspired heroic poems, satires, fictions, epigrams, sonnets and philosophical verse. As it celebrated aerial achievements and aired thoughtful ambivalence, the literature of balloons played with experiment and enlightenment. It also has an interesting tendency to light verse, which invites new critical thinking. My presentation discusses some highlights from the literature of balloon madness.”

Those wishing to undertake some preparatory reading should request the recommended article and poems from Christopher Tilmouth, Faculty of English.

Clare Brant is Professor of Eighteenth-Century Literature & Culture at King’s College London, where she co-directs the Centre for Life-Writing Research. Her book Eighteenth-Century Letters and British Culture won the ESSE Book Award of 2008; her book Balloon Madness: Flights of Imagination 1783-1786 will be published by Boydell & Brewer this autumn.