Please note that tonight's meeting of the Science and Literature Reading Group has been postponed.

Melanie and Charissa
No comments:

Exhibition - Marginalia in the Whipple Library

‘Marginalia’ has been imagineered by Toby Bryant and actuated and realised by James Livesey.

Across the three display cases on level one in the Haycock Theatre, the exhibition looks at various examples of marginalia from across the Whipple collection. Featuring annotations made in a working medical textbook, bibliophiles collection notes, some shameless hero worship and a watercolour of the authors son, all of the examples chosen are interesting in their own way. They also serve as a ‘what-not-to-do’ guide as to how to treat your Whipple library books.

An in-depth blog about the exhibition will be going up later this week.

If you’re in the library, please do take a look.
No comments:

Email ThisBlogThis!Share to TwitterShare to FacebookShare to Pinterest
Labels: Exhibition

Thirteenth Cambridge Wellcome Lecture in the History of Medicine

Thursday, 1 March 2018 3.30pm in Seminar Room 2, Department of History and Philosophy of Science

At the courts of sixteenth-century Europe, a number of princely physicians and surgeons tested promising poison antidotes on condemned criminals. These tests were contrived trials, in which a convict took a deadly poison followed by the antidote. The medics sometimes shared detailed descriptions of their poison trials in printed publications or private correspondence, much as they shared case histories of ill patients. Yet these very same physicians disputed the value of remarkably similar tests on animals conducted by charlatans and empirics in marketplace shows. Sometimes, however, these worlds overlapped directly. In 1583, an empiric named Andreas Berthold published a work in Latin praising the virtues of a marvellous new drug, a clay called 'Silesian terra sigillata'. Berthold presented the drug as a perfect Paracelsian remedy for poison and, like most antidotes, useful against many other illnesses as well. While such lofty claims might easily have been disregarded, Berthold noted that his readers did not have to 'trust me on my bare words'. He concluded his book with three testimonial letters from powerful figures – two German princes and one town mayor – about trials they had conducted on the drug in 1580 and 1581. In all three cases, physicians had given poison to test subjects (two used dogs, one a condemned criminal), followed by the antidote. In every case, the subjects who were given the Silesian terra sigillata survived the poison. These testimonial letters provided official legitimacy to an alchemical empiric, in the form of tests conducted by physicians. Meanwhile, other alchemists began to use a different form of testimony to demonstrate the marvellous effects of their antidote cure-alls: testimonial letters from patients describing their miraculous recoveries, which physicians derided as a perversion of the case history. Some of these alchemists likewise ridiculed the poison trial as a lowly and irrelevant form of proof. This talk examines the overlap between the genres of poison antidote and panacea and the debates these drugs engendered in attempts to 'prove' their efficacy.

Plus, earlier in the day (11:30-1pm, Seminar Room 1, HPS), Professor Rankin will discuss a draft chapter on 'Testing the Kunstkammer: bezoar, power and fraud in the sixteenth-century global drug trade’ (abstract below). If you would like a copy of it, please email me.

In 1563, the imperial surgeon Claudius Richardus wrote a glowing account of the virtues of bezoar stone, prized for its properties as an antidote and a cure-all. After giving a long description of the drug's appearance and virtues, Richardus recounted a series of tests of the drug he had personally conducted at the behest of the Holy Roman Emperor Ferdinand I: two in which patients under his care received bezoar in the midst of a serious illness and two in which he tested the bezoar in deliberate trials using poison on condemned criminals. All four men experienced miraculous recoveries. His testimony appeared to demonstrate the incontrovertible efficacy of bezoar. Yet bezoar stone was not just a drug. It was also an exotic, highly valued item in the princely Kunstkammer, or chamber of curiosities – often embedded in gold filigree to brighten up its dull brown exterior or set into drinking cups studded with gemstones or other rarities. It commanded a regal price in the marketplaces in Goa and Cochin, and fraud was a constant concern. The prince who could demonstrate he possessed a bezoar that worked had a powerful weapon indeed. In his 1589 treatise on bezoar and other exotic antidotes, German physician Johann Wittich proclaimed a grave need for 'powerful and artful substances that have been proven adequately in a trial'. This paper examines the role of testing exotic poison antidotes in the context of the expanding global drug trade in the sixteenth century.

These events are organised by the Casebooks Project and funded by the Wellcome Trust.
No comments:

HPS Departmental Seminar - 'Barnum, Bache and Poe: the forging of science in the Antebellum US'

Two opposed tendencies characterised US public culture around 1840: first, a sharp increase of printed matter in which the sites, audiences, styles and speakers for matters of public concern exploded in number and diversity; second, an elite movement to unify knowledge through centralised institutions. In the domain of science, Barnum's 'American Museum' typified the first, while the US Coast Survey, directed by patrician polymath and West Point graduate Alexander Dallas Bache, exemplified the second. The life and writings of Edgar Allan Poe - who trained at West Point, and wrote constantly about the sciences, even as he struggled to survive as an editor, poet and storyteller - pushed in both directions at once. Poe 'forged' American science and letters in two senses: by crafting believable fakes which fed the uncertainty about authority over knowledge, and by lending aid to projects to restrict the flow of information and establish a unified intellectual infrastructure. His work thus offers uniquely astute, if dramatically conflicted commentary on the relations of science and public in a key phase of national consciousness and industrialisation.

John Tresch, associate professor of history and sociology of science at the University of Pennsylvania, has been named Chair in History of Art, Science and Folk Practice at the Warburg Institute. The new professorship will be critical in restoring, developing and elaborating the theoretical, cultural historical and anthropological implications of the work of Aby Warburg, the founder of the institute, and will inspire the kinds of cross-disciplinary work that will help revitalise the possibilities of research in the humanities. Professor Tresch is an historian of science and technology whose work focuses on changing methods, instruments, and institutions in the sciences, arts, and media. His book The Romantic Machine examined intersections between romanticism, science, and utopian politics in France before the revolution of 1848; it won the History of Science Society's Pfizer Award for Outstanding Book in 2013. Supported by a fellowship from the National Endowment for the Humanities, he is currently finishing his next book, The Reason for the Darkness of the Night: Edgar Allan Poe and the Forging of American Science, which examines Poe's life and work in the light of antebellum America's obsession with science and technology. His other ongoing projects develop the concept of 'cosmograms' as a tool for comparing forms of natural order, and explore connections between contemporary neuroscience and traditional monastic practices. He has held fellowships from Columbia's Society of Fellows in the Humanities, the University of Chicago, Northwestern University, the Max Planck Institute for History of Science in Berlin, the Huntington Library, the Cullman Center at the New York Public Library, and the Institute for Advanced Study in Princeton, and has been visiting researcher at King's College London and at the Ecole des Hautes Etudes en Sciences Sociales. He is editor-in-chief of the History of Anthropology Newsletter. Professor Tresch holds a BA in anthropology from the University of Chicago, a DEA from the École des Hautes Etudes en Sciences Sociales and the École Normale Supérieure in Paris, and a PhD in History and Philosophy of Science from the University of Cambridge.

Email ThisBlogThis!Share to TwitterShare to FacebookShare to Pinterest
Labels: HPS 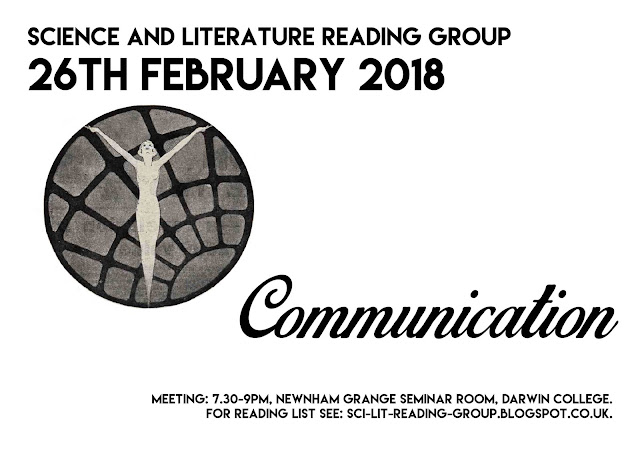 For the final meeting discussing the aether, we will take to the airwaves, reading three pieces which in different ways consider the consequences of communicating across (and even beyond) the globe:
We will meet once again in the Newnham Grange Seminar Room at Darwin College. All welcome!
No comments: