A Workshop on Practices of Taste & Connoisseurship in Early Modern Europe: UCL, 4th May 2018

This one-day workshop explores the role of ‘subjective’ practices in the early modern sciences. We are interested in the epistemic dimension of judgments that we now think of as subjective, either because of the senses they deploy (such as taste and smell) or because of the ends they serve (such as determining the quality and originality of a work of art). What were the technical procedures that early moderns used to make these judgments? What sort of knowledge was involved in them? And how did that knowledge stand in relation to early scientific disciplines, such as medicine, natural history, chemistry and natural philosophy? We draw on literary history, art history, and the history of science, and we cover a wide range of things that early moderns made judgements about, from scientific instruments to the pleasures arising from sensory experience.

This event is free, but registration is required. To register, please click here to access the Eventbrite page.

For further information see the workshop website.
No comments:

As part of the ERC funded Narrative Science project we are hosting a 1 day workshop focussed on the intersection of visual practice and narrative in science. The workshop will take place at the London School of Economics and Political Science, on the 19th of April.

Science abounds with visual materials: exemplary objects, 3D models, photos, diagrams, maps, graphs. Scholars in the history, philosophy and social studies of science have highlighted various features and roles of these objects and the practices in which they are embedded, including reasoning, speculation, demonstration, illustration, communication and others. This workshop focusses on the association of visual practices with narratives in knowledge making. In some cases, visual objects embed narrative qualities in themselves; in other cases, narratives are needed to make sense of the visual materials.

To learn more about the Narrative Science project as a whole, please see the special issue we recently published in Vol. 62 of Studies in History and Philosophy of Science.

Workshop spaces are very limited. If you are interested in attending, please write to Dr Robert Meunier as soon as possible.

PhD travel bursaries
To increase participation from the postgraduate community, we are making available 4 travel bursaries, each of a maximum of £250. These can be used to recover the cost of train or airfare for those who wish to attend, and who are currently enrolled on a PhD programme, preferably with research interests directly related to the workshop agenda. To apply for a PhD travel bursary please write to Dr Dominic Berry. Please include: Your name University Affiliation PhD Programme and thesis title And no more than 100 words on how this workshop relates to your research. The deadline for applications to the travel bursary is Friday 6th of April. You will be notified as to the outcome of your application shortly thereafter. Applicants will be selected to ensure a diverse range of research interests and institutions are represented.
No comments:

Life in a Dish event

How does society connect to and manipulate living matter, and how can we explore this through film and virtual games?

Cambridge Stem Cell Institute and the Department of Sociology bring you an interactive panel discussion exploring the relationship between researchers and the living materials they study.


Living materials are fragile and challenging to handle. What is it like to work with them every day? We'll explore this question in the context of stem cell research, with a focus on cell cultures in a dish. We're going to ask for your input, as we present a virtual game designed to bring cell culture into your living room! The night will close with a private screening of award-winning short film Dish Life, accompanied by a wine reception.

Monsters and Me - Frankenstein and AI 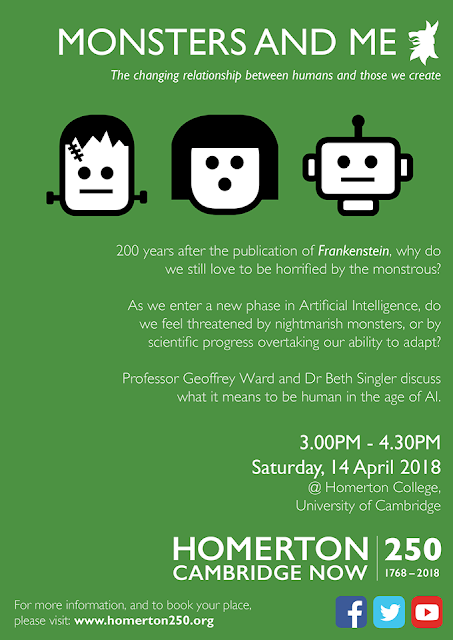 Besides his literary accomplishments, which inaugurated a new era in modern German culture, scientific studies also played a significant role in the life of Johann Wolfgang von Goethe (1749-1832). Goethe's research coincided with the emergence of modern scientific disciplines and their institutional establishment within the university system, thereby supplanting earlier scientific practices and methods. As rector of the scientific institutes at the University of Jena, Goethe stood in close contact and corresponded with scientists in Germany and beyond. The completion of the Leopoldina edition of his scientific writings allows the opportinity for a new assessment of Goethe within the context of science as it was emerging during his lifetime and within the history of science in general. This award seeks to foster scholarship in this area.

To mark the 35th anniversary of the publication of Professor Dame Gillian Beer’s ground-breaking study of the relations between science and literature, the British Society for Literature and Science is sponsoring an afternoon’s discussion with Gillian Beer, the BSLS President, at the Natural History Museum in Oxford on Saturday April 7th.

The event is free, and all welcome. Please sign up via Eventbrite here.
No comments: